It’s true that the last few weeks have not been the Canucks most memorable on record, at least not for the win column. If they can get a string of wins together before Christmas, who knows what might happen, it could be the catalyst that drives them forward the remainder of the season. There’s still a lot of hockey to be played and it’s not panic time just yet BUT every game’s importance has increased as their division begins to tighten. For this moment, let’s forget about the ins and outs and everything else just for a few minutes.

I’ve got a special post to share with you, Canucks fans. I had an idea a few months back to feature a story about the story of THE Johnny Canuck. I thought it would be really fun to share with all of you. All I had to do was ask him if he’d be willing to share said story with all of us and hope that the answer would be YES. As you can probably guess by the title of this post, he did indeed say YES. Together, we spent some time talking all things hockey and Johnny Canuck inspiration.

His name is JOHNNY CANUCK, my name is Sarah and THIS is our interview of sorts: 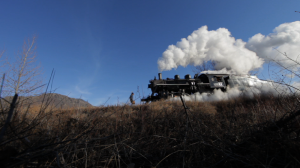 Sarah: How did you become a hockey fan?

Johnny Canuck: Inherited genetics, I’d say. My Dad loved watching the Canucks, we watched games together AND he knew a few of them, years ago. I remember being a kid when my Dad introduced me to Harold Snepts and Richard Brodeur. Snepts said to my Dad, “He looks tough”. That meant a lot at the time and has stuck with me. At the time, I had a blonde bowl cut like my sister, so after he told me that, I felt different, more powerful, more superhero. I bumped into Snepts at a game last year and I thanked him. He was shocked, it was awesome.

S: That’s a pretty incredible memory to have come full circle with Harold Snepts! I have not been lucky enough to meet him yet BUT I did attend the game when he was inducted into the Canucks “Ring of Honour” a couple of years ago.

How did being a fan of the game inspire the evolving/transformation of Johnny Canuck?

JC: I don’t think I could make these films unless I loved the Canucks, hockey, Canada, movies and my friends. Johnny lives the life of the Canucks and personifies Canada. That’s why I made the first movie: to make my friends laugh and get back into making movies after being primarily focused on video-games for many years.

It’s funny how popular media is starved for real human emotions and reactions nowadays. Sports is one of the last frontiers where you can still see humans acting naturally in instinctively reactive ways, it’s a great place to draw some inspiration from. I designed Johnny’s characters out of Canucks I watched over the years. Pat Quinn as the mentality, Bertuzzi as the brute, Linden as the gentleman and Luongo was the original inspiration with Johnny on his mask for years.

Hockey games are so much like movie story structures as well. Three acts, roughly ninety minutes of action and one small moment early in the game can be the emotional journey for the rest of the game. I love the similarities and how each platform speaks to the raw human in everyone.

S: I love the comparison of hockey to film structure, it’s a unique way to look at the game from frame to frame. As you said, the smallest of moments in both platforms can impact the entire journey.

What’s the BEST part of BEING Johnny Canuck?

JC: Oh goodness, many moving parts. I like making people happy with movies, whether it’s strangers or family or friends. Kids think I’m a living cartoon. I get to make short films that premiere to a live audience of 19,000 people. That’s CRAZY! I get to meet legends of hockey. The season pass in press row. Creating content that succeeds without slandering others. The cool and kind people who work for the Canucks who have now become friends. Doing a job that nobody in the world has, so it’s all a mystery unraveling.

S: Sounds like an incredible adventure. I like the live cartoon comparison! And having been in that 19,000 live audience, when one of those films has premiered, I can tell you it’s a unique experience. I can still remember when the first, “My Name is Johnny Canuck” video was released and feeling like it would become more than a viral video. What was it like for you, after that first video was released and now that it has since inspired many more?

JC: The first movie was such a surprise and a blur. Honestly, I didn’t anticipate much attention and then suddenly within a few hours, chaos ensued. I did seventeen interviews in the three days that followed, slept maybe two hours, had the movie featured on Entertainment Tonight, National news among the internet features and local media. I know my movies aren’t perfect and they are half ridiculous, so seeing that many people get excited about it was a beautifully implosive feeling.

Now, it’s still very much the same emotion, but maybe less chaotic. This year, the Canucks have really embraced the Johnny movies and we’re aiming to have something broadcast at every game this year. In the last few months, I’ve filmed: Clydesdale horses, carriages, 20 extras, steam trains, goalie outfits made of wood, Uncle Sam, little Johnny’s birthday party in snow, rain and sun, ALL with new cameras and drones. It rules and MOST of the season still remains.

S: From the behind the scene photos you’ve shared on social media, I can honestly say all the upcoming films look to be just as awesome as the ones already released.

Ever have any crazy fan interactions? (aside from that time that I punched you during the social suite night last season…).

JC: Haha, my jaw still aches! For the most part, no. Almost everyone is incredibly kind, even Bruins fans, surprisingly. The craziest ones were probably marriage proposals which were still very sweet, I declined but still have regrets to this day.

S: Sorry about the jaw! I agree wholeheartedly that hockey fans, and yes even Bruins fans are pretty spectacular across the boards. Thank-you AGAIN for sharing your story with me AND allowing me to share it with everyone else!

And for those of you lucky enough to be at the game tonight, CHEER LOUD and ENJOY the NEW JOHNNY CANUCK FILM that is premiering tonight!