It’s been a few weeks since I last posted a blog, but I promise, I did not disappear. A heavy work schedule and a few days off for Christmas kept me away. I’m back and ready, so let’s get back to work, shall we? Talk hockey to me!

Last season the Canucks had a December to remember posting a 10-1-2 record and the month that followed was when everything began to unravel. This season, December has not exactly been THAT memorable save a 5-game losing streak but perhaps that could be a good thing. Last year in December, it seemed like THIS team was capable of greatness and then the chain of everything that could go wrong, did go wrong when the new year began.

Yes, the Canucks have had their struggles THIS December…but they also have something that they did not before last year’s 33 game mark: 20 wins and instead of focusing on their individual bests, they are working together as a TEAM. Scoring on any given night is being done by committee. Can you recall a time in recent Canucks history when scoring was somewhat balanced? It feels like it has been a long while. They are not solely relying on the Sedins every single night but rather EACH line is contributing.

33 games in and as has been said many times this season, we have seen a little bit of everything from the good, to the bad and everything in between. First goals, milestones reached, back to back shutouts, games won, games lost, overtime glee and overtime heartbreak. Lots of little and big moments that have yet to be seen as the team has 49 more games to leave their mark on the season at hand. As they return from holidays, the Canucks will have to be ready to play their best with a trio of games versus the Californias. It will not be an easy task for the team but they are proving to be competitive within their division with an impressive 9-2-1 record through 12 games.

33 games in and despite a few lopsided losses, THIS team has evoked hope in a way that never seemed to happen last season even when they were playing well. This team still has work to do in the remaining 49 games to prove that they are in fact playoff contenders but they are off to a good start in working towards that aim.

33 games down, 49 more to go before all is said and done and it all begins tomorrow when the puck drops in Anaheim. The Canucks will look to build upon the momentum of their two-game win streak they took into the holiday break. Keep your eyes on these next few games, Canucks fans- Henrik Sedin’s next goal will be his 200th career goal.

Yes, it is now December, but today we will take a closer look at the November 2014 that was for the Canucks. 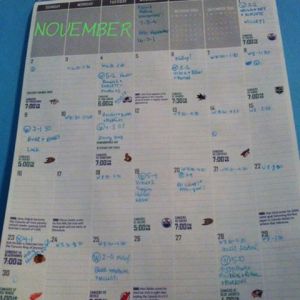 The first 24 games have given the fans a closer look at what this team is capable of this season. Suddenly all of those who said the team was destined for a rebuild are suddenly saying: “is THIS team for real?”

Yes much like October, there were a few bad moments but there were also some incredible unforgettable moments in November.

A missed call or two that resulted in the go ahead goal versus Nashville and perhaps cost the team the game and delayed Eddie Lack’s first victory of the year.

A 5-0 loss to the Arizona Coyotes that featured a Martin Hanzal hat trick on home ice. Need I say more?

Dan Hamhuis suffered a lower body injury in the opening minutes of the November 20th game versus Anaheim that will leave him out of the lineup indefinitely and force the rest of the defensive core to step up until he returns.

The power-play clicked just 4 times in more than 40 tries and will be an area that the team will have to address moving forward as special teams success can translate to post-season success. (**In their first game of December, the team tried new power-play alignments and found success scoring 3 goals on the man advantage.)

The Canucks and hockey world is a little less bright since the news of Pat Quinn’s passing on November 23rd.

Through 14 November games, the team picked up points in 10 of those games. Desjardins continues to instill the team with the belief that ANY line CAN be the difference maker on any given night.

Remember that road trip that was dubbed a “death march” by the media? The one that went straight through the Californias and Colorado? With the exception of the game against LA, the Canucks were impressive on this trip picking up wins in the remaining three games. The Canucks stole two points from Anaheim in a shootout thriller, two points from Colorado with 5 unanswered goals and 2 points from San Jose in the Shark Tank thanks to one of the best games played by Ryan Miller. It was especially nice to see the team earn a victory in San Jose as the Sharks have had the Canucks number in recent years.

Remember that OT Sedinery magic from October against Montreal? Well, they did it again, this time against Ottawa! (perhaps they will strike for a third time in Decemeber?) The Sedins continue to dazzle us with mind-boggling impossible angle goals in OT magic:

Nick Bonino scored the GAME WINNER in the shootout in his return to Anaheim and Eddie Lack picked up his first victory of the season. In his victory, he helped the team rebound from a tough LA game with some big saves including a stop on Ryan Kesler and all three shooters in the shoot out.

Bo Horvat scored his FIRST NHL goal on home ice against Anaheim and began the team’s battle back to steal a point from the Ducks:

He picked up his FIRST three assists the very next game against Chicago. Bo was also informed that he would be staying with the Canucks instead of returning to junior, making this a November that he will never forget. Have I mentioned his faceoff skills that are near to tops in the league with 59.7%?

It seems like people are always harping on Jannik Hansen for his contributions or lack of contributions on the ice. Suddenly in late November saw Hansen find his scoring touch scoring 5 goals over three games, including scoring his FIRST career hat trick against the Chicago Blackhawks on November 23rd.

Alex Burrows continues to flourish this season with linemates Chris Higgins and Nick Bonino and being the benefactor of some great passes:

Ryan Miller posted BACK to BACK shutouts against New Jersey and Columbus. By November’s end, Ryan Miller had improved his record to 15-4-0.

The Canucks final home game in November featured an incredible Forever a Canuck tribute to the legend that was Pat Quinn. More than 18,000 fans in the building and you could hear a pin drop as Mark Donnelly sang a moving rendition of “Oh Danny Boy”:

This season is for you, Pat!

October saw the Canucks mildly surprise folks. November saw the Canucks build upon their early success and continue to be one of the best surprises around the league this season. Last year, even when things were going well, you could see the team struggling. This year, even if the team goes down by a goal or even two, you see them battle back and there is no giving up when the going gets tough.

True, they have not won every game and nor will they, but through 24 games in the first two months, there is STILL a long way to go but this team is doing something they did not do all of last season: enjoying the game and playing the game for EACH OTHER.  Every player has been instilled with the belief that they can make an impact or be the difference on any given night. Every line is given an opportunity to contribute, no one line is being singled out as the sole line responsible for all of the scoring. It has been incredibly refreshing to see BALANCED and SECONDARY scoring.

From an impressive October, a balanced November to a December that currently sees the Canucks in the middle of their longest road trip of the season (7 games) and looking to stay atop the Pacific Division. Here’s to seeing the good, the bad, the big, the small and everything in between that will make December memorable for the Canucks. There are still many games left to be played before all is said and done, but this team through October and November have re-ignited something among their fan base that was lost last season: hope. Hope that once again anything is possible, hope that maybe just maybe last year did not mark the end but simply a new beginning.