You win some games, you lose some games. Sometimes you lose THREE games in a row and they say the panic SHOULD set in. At least that is how some people said fans should react when the Canucks found themselves in the thick of a losing streak and on the verge of falling into old habits that last year were all too common. Last year when things went wrong, it was hard to watch games from start to finish. This season there have been tough games where there have been flashes of last year’s mistakes that cost the team the season. There have been some tough stretches but let’s remember that THIS IS NOT last season.

It’s true that the team struggled during their recent 3-game skid scoring just TWO goals total in those three games. Each loss brought up memories from last season and the question of whether THIS team can still be a contender with playoff potential. The good news is that in the two games that have followed THAT 3-game skid has seen Ryan Miller return to top form posting back to back shut outs ON the road to keep THIS team in the playoff contention race. They will need Millsy to steal games down the stretch just as he stole the last two games but they will also need balanced offense combined with strong defense to help them find their way back into the playoffs.

Yes, they have struggled at times this season, but THIS is not last season. Last year was a comedy of errors which saw nearly everything go wrong and at times the team looked disjointed. This season has seen the team struggle at times but even during their struggles THIS season, they have found ways to come together united as a GROUP.

Expect the unexpected and good things will happen. This past Christmas I was presented with an incredible surprise: an invitation to participate in the Vancouver Canucks #SocialSuite night on January 8th. What is the Vancouver Canucks #SocialSuite night, you ask? I will tell you. It was a night in which a variety of Canucks fans and bloggers were invited to view the game together in a SUITE. A view like no other, great food, impeccable company, an opportunity to see Roberto Luongo play one more time and perhaps just perhaps there would be a special guest or two.

I am beyond grateful that I was asked to be a part of this Canucks fan experience. I did not know what to expect as I had never been to an event like this before. Sure, I had crossed paths with a few of the fellow attendees on social media prior to the game but never in person. Rest assured once there, everyone was so kind and inviting that there was no place for the nerves. Watching the Canucks game with fellow dedicated fans in person was absolute perfection and yes felt very familiar to when we usually “Live Tweet” the games together. It was nice to finally put names to faces while sharing the unforgettable experience together in person.

This night was not just the Canucks Social Media Suite night, but also marked the return of Luongo for the first time since he was traded in March 2014. For the Luongo fan in me, I was beyond ecstatic to get to see him play one more time in the arena he once called home; even if it was odd seeing him play on the wrong side of the rink and wearing the wrong jersey. This night, this game was all about Luongo and the fans giving him the respect that he has ALWAYS deserved. The building was electric when their former number one stepped onto the ice treating him to a round of “LUUUUU” cheers every time he touched the puck. The standing ovation that followed the tribute video(linked below), gave me chills seeing the entire arena stand in unison for the man that gave his everything to THIS team for eight years.

Perhaps from the outside looking in, it seemed odd or even inappropriate to hear the home crowd cheering for the opposing goal-tender, but that is not what it was. This night was for the fans to have closure in a way that they were not given last season and to acknowledge Luongo for everything he did for this team. It may have seemed odd from the outside looking in, but from the inside it felt exactly right. Did I want the Canucks to win THIS game? Yes, of course I did but this night was Roberto Luongo’s night to shine and shine he did while stealing two points in his former home arena. Yes, a win for the home team would have made the #SocialSuite night even more epic than it already was, BUT seeing Luongo play at his best once more was also something I will never forget.

Here’s an inside look behind the scenes of what the #SocialSuite night looked like from inside the box: (featuring photos taken by photographer, Devin Manky as well as photos taken by yours truly and my sister.) 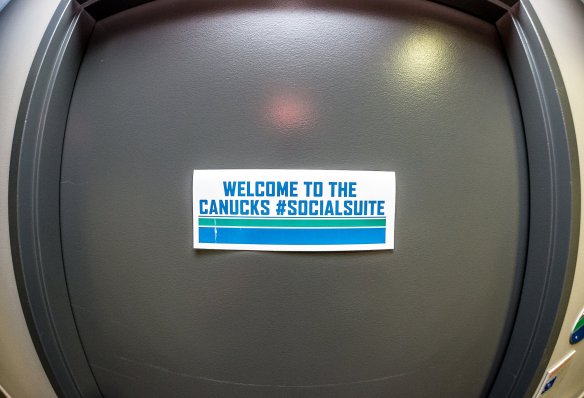 Without any further ado, I invite you along for the ride that was an epic night spent with some of the best Canucks fans and a few incredible guests! 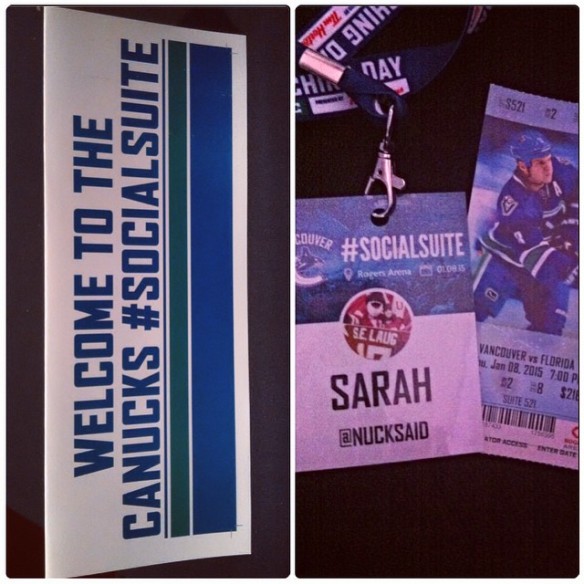 Everyone had a personalized name tag waiting for them…never have I ever felt so official at a game! Thank-you, Canucks! 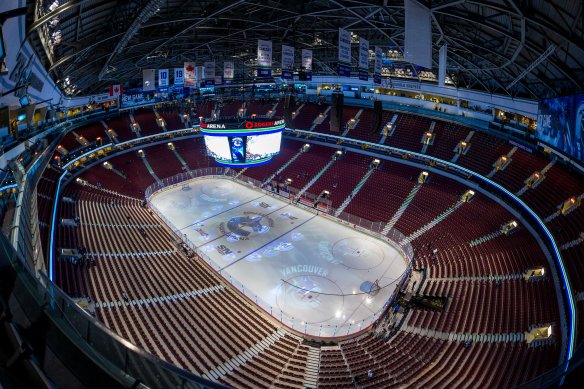 The calm before the storm, and the epic view from above. (You could say we had amazing seats). 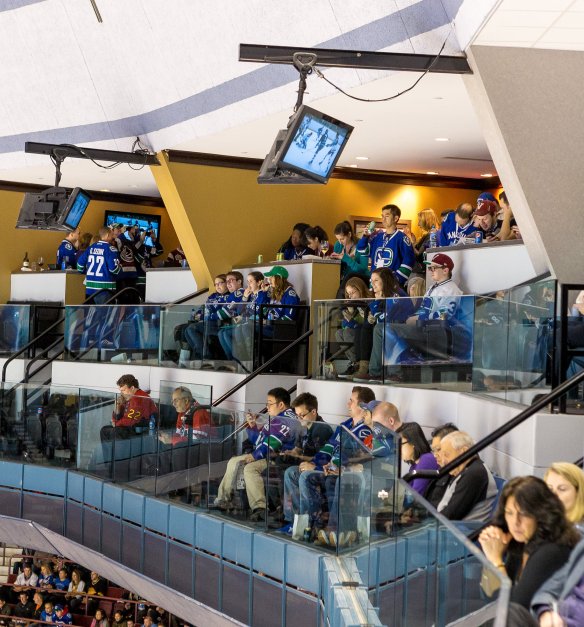 Eyes on the ice, phones on the ready as the puck was about to drop! “Quick, everyone tweet at the same time!” 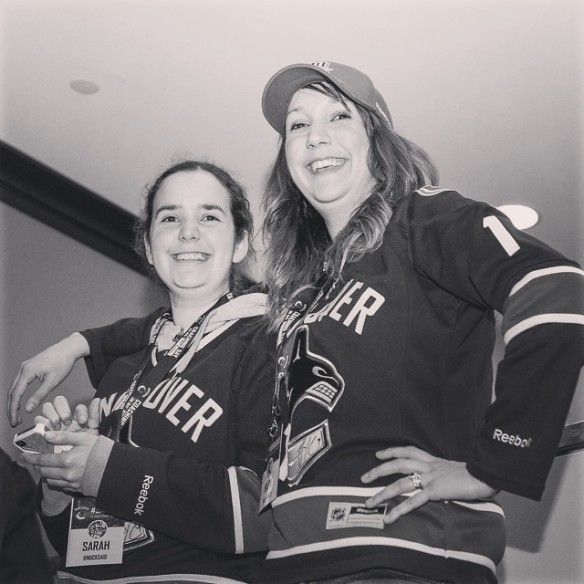 It was social media affair as evidenced by my tweeting in the above photo, but having my sister Jessica as my guest also made it a family affair. Quite an adventure, we did have! 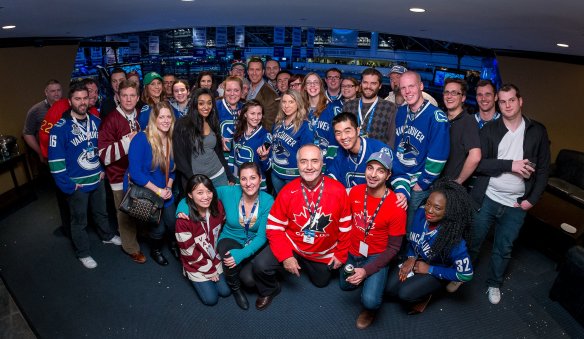 Group photo time! And YES, THAT is in fact Kirk McLean who snuck into our suite just as we were lining up for this photo. Cue the “Captain Kirk” selfies and group shots! Everyone wanted a picture with McLean and he was the epitome of patience letting everyone have their chance to get the perfect shot! (Yep..whispers of “THE SAVE” and “LEGENDARY” echoed across the room as everyone stood in awe). 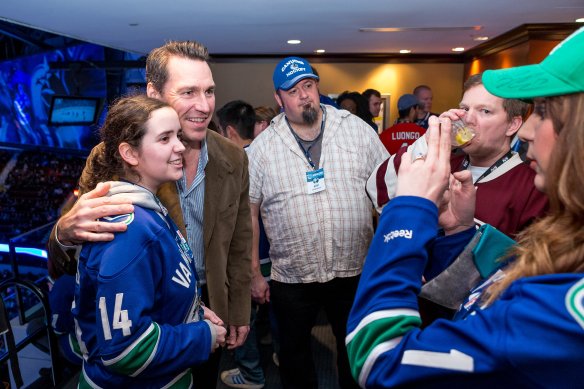 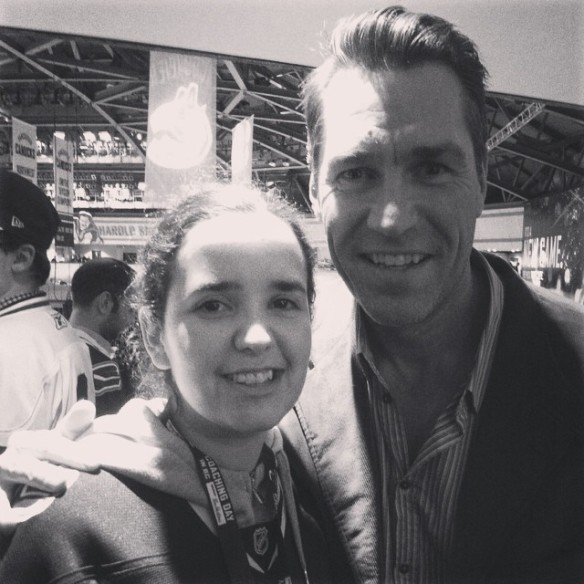 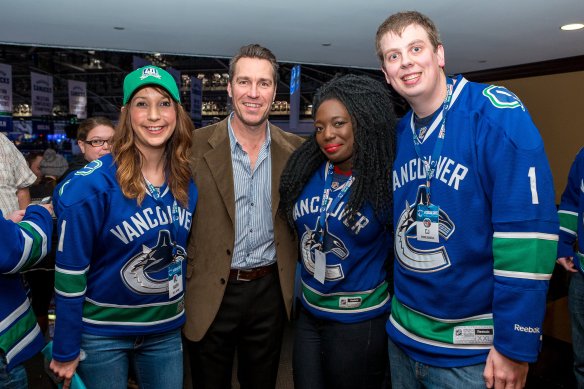 My sister finally got her picture with McLean! 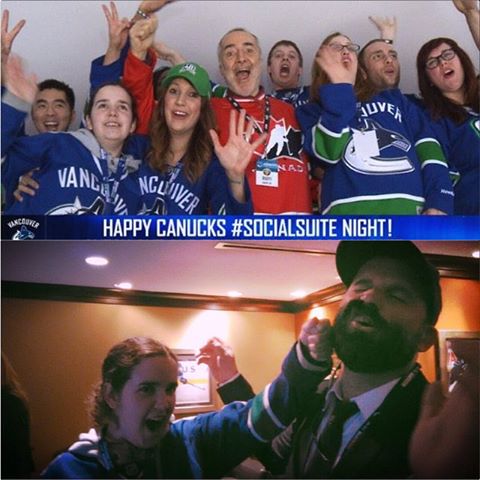 We made it on the Jumbotron, not once BUT twice in the #SocialSuite to say hello to the entirety of Rogers Arena! Oh and yes I may or may not have punched Johnny Canuck in the face who also stopped by for a visit with everyone…it was EPIC.

And as you all know, my favourite Canuck adventures are NEVER complete without an appearance from my favourite Orca… 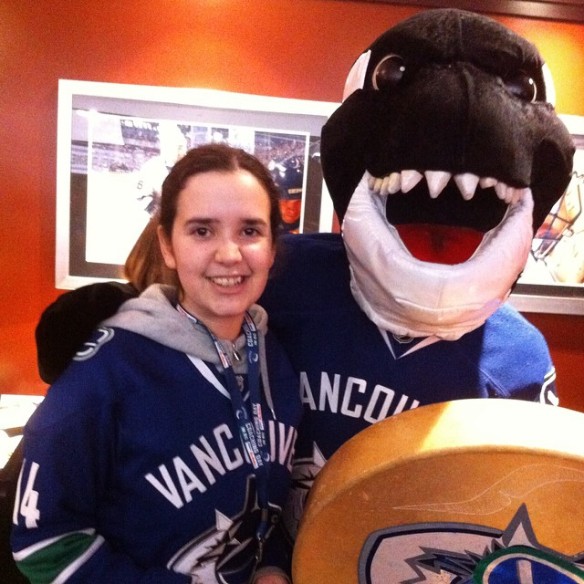 and Fin sure did give our suite a thrill and helped to make the evening absolutely FIN-tastic! 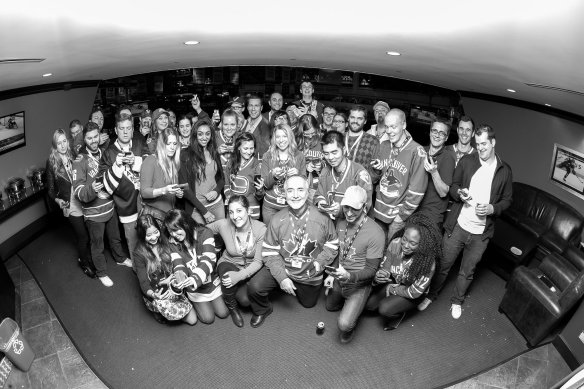 On behalf of myself and everyone who was lucky enough to particpate in the Canucks Social Media Suite Night, I cannot say thank-you enough. Thank-you to the Vancouver Canucks and Laura Wong for the incredible invitation and making this fan feel like part of something amazing. Thank-you to all the other participants who attended the event, it was amazing to meet you all, here’s to staying in touch and crossing paths again some game night! Thank-you to Fin, Johnny Canuck and Kirk McLean for helping make this one absolutely unforgettable night that this fan will never forget. Thank-you to photographer Devin Manky for capturing the best moments of this evening and sharing the pictures with all of us! Thank-you also to special sponsor Save-On-Foods and their Canucks FAN ZONE program that were in part responsible for making this night happen and a massive success!

Sincerely, THAT was one of THE best fan experiences I have ever had while watching a game at the arena. Can we do THAT again next game?

Roberto Luongo will make his highly anticipated return between the pipes at Rogers Arena as the opposition for the first time since being traded back to the Florida Panthers. Will you “LU” or will you “Boo” when the Canucks former number one goal-tender hits the ice? The answer SHOULD be simple: Lu deserves respect and the fans owe him respect, so you SHOULD most definitely: “LUUUU”. Love him or hate him, Roberto Luongo will go down in history as one of the all-time best goalies to ever don a Vancouver Canucks jersey. His had endless critics during his entire tenure in Vancouver from the fans to the media but no one was a bigger critic of his time in the crease than Luongo himself. In his first presser since returning to Vancouver, he expressed disappointment in not being able to bring a cup here.

Yes there will still be the critics who say that Luongo was not good enough. Yes, it’s true that he did not win a cup here in this city but that truth will still never undo the incredible feats that he DID accomplish during his eight years as a Canuck.

Many incredible moments that can never be taken away no matter how hard the critics are sure to try. Yes, he asked to leave Vancouver but can you blame the guy after the way the last 2 1/2 years of his tenure went? Trade him, they said. It felt as though the entire city had turned their back on him, always calling for the back up and quick to blame him for every fault with the team. It got to the point where it seemed even the coaches had turned their back him or lost faith in his abilities with the final straw that saw him NOT play in the Heritage Classic. That was absolutely a low point and an unfortunate way to end his eight year tenure with the team.

He gave THIS city everything he had EVERY single time he was on the ice. Roberto Luongo was and still is the epitome of a class act both on and off the ice. If you are also at the game on January 8th, then I hope you will join me in a LOUD resounding “LUUUUUUUUUUUUUUUUUUUUUUUUUUU” when Bobby Lu steps on the ice. No matter how the game between the Canucks and the Panthers ends at final buzzer, this shall remain true: Roberto deserves our respect and he has more than earned it.