The day has finally come, a word I never thought I’d hear either Henrik or Daniel say out loud. Or perhaps, it’s one that I hoped would never be said. At the conclusion of the 2017-2018 regular season, the Sedins will be officially retiring from the NHL.

There are NO words that I can put together that will possibly ever come close to enough to express my thanks, but here we go:

Now that it’s officially, official; how do we as a city, as a fan base begin to thank-you for everything you’ve done? Is it even possible for us? For the last 18 seasons, the two of you have defined this team and mesmerized the NHL with your twin-tuition on the ice.

Thank-you, thank-you, thank-you for 18 years of absolute magic, defying the odds, the ever persistent pursuit of your dream that became a reality and for inspiring SO many players and fans to also never give up. I wish that you could really know just big an impact you’ve made on the team, the franchise, on the city, the province and on the fans around the world. You made the coaches, your teammates, this city and every single Canucks fan beyond proud.

We will savour these final three games. this final hurrah in your storied careers that are destined to be forever immortalized in the hockey hall of fame. Three more games for us to savour every last moment of Sedinery yet to come.

Over the last 18 years. you’ve given everything you had and more to this team, this franchise, this city and the fans. Your dedication was never in question, you persevered through the good and the bad and always led by example. Leaders on and off of the ice. You defined what it meant to play with heart. And please know that going into this final stretch of your careers, that you NEVER once let this city down.

And to THIS fan, to all Canucks fans, no matter what happens next on your journey or where your path takes you when this season comes to an end, you will always and forever be Canucks.

It’s near impossible to pin point ONE favourite moment of Sedinery magic when you’ve given us 18 years on unbelievable moments. Among those most treasured for me are witnessing Henrik notch his 1000th point, Daniel scoring many of his 41 goals during the 2010-11 season BUT my most favourite was just days ago when my sister and I finally had the opportunity to meet you both: 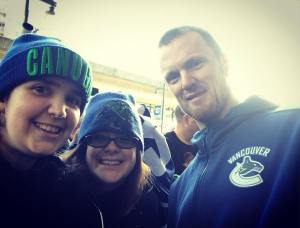 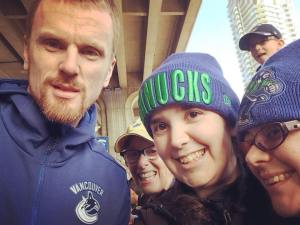 Little did we know, that just two days later you would make an announcement that would both break our hearts and make them soar with pride that we’ve been lucky enough to witness your entire careers. There’s not been one game that I’ve attended at GM Place/Rogers Arena that both of you didn’t play. Picturing a Canucks team that doesn’t feature you at it’s heart, will take some time to adjust to.

And while I’m excited for the team’s exciting potential down the road, I’ll never forget the two legends that paved the way for this new core. You’ve left an indelible mark that will forever be felt in the franchise and looked upon to remember that even when things get tough, all that needs to be done is to think back of how you both always kept pushing forward despite the odds and we will be reminded that when you tune out the negative, ANYTHING is possible.

Thank-you doesn’t seem even close to enough but it’s what I have to offer. Henrik, and Daniel, THANK-YOU, for everything.

And to all of YOU Canucks fans, let’s make Rogers Arena thunderously LOUD these final two home games of the season. Let’s show Henrik and Daniel just how much they’ve made a difference for all of us Canucks fans.