They said it was impossible. They said he didn’t have what it takes to make it long term in the NHL. They have spent years berating him and his brother for everything they do on and off the ice. They have no idea just how valuable these two players have been to the Vancouver Canucks organization, fans and the city of Vancouver.

Henrik Sedin deserves all kinds of respect in the hockey world despite arguments from those on the outside will say. They can keep telling us all the insults, there is not one negative thing that Canucks fans haven’t heard over the years. They will keep proving why they ARE deserving of being inducted into the hall of fame one day down the road.

From a rookie searching for his game to a now seasoned veteran leading the way on and off the ice. Friday night was all kinds of incredible for Canucks fans to witness as Henrik Sedin had another night for the record books.

All week you could feel the energy building up in Vancouver as Henrik edge ever closer to the milestone. Walking into Rogers Arena for the game against the Florida Panthers, you could feel the anticipation in the air. There was a buzz among fans as we were ready to witness Henrik Sedin reach yet another milestone. His very first NHL point came against the Florida Panthers, so it seems fitting that his 1000th should come against them as well. The feeling in the arena was electric from start to finish. It is a game that my sister and I will remember every second of the experience for years to come. 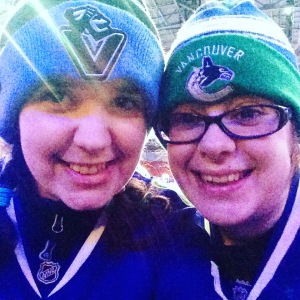 Sometimes hockey is pure magic and if you’re really lucky you will get to witness it just as an incredible crowd did Friday night when Henrik Sedin scored his 1000th NHL point. Heading into the game, every single person in attendance knew the possibility of what we might witness and was hoping it would be more than an assist or an empty net goal, and boy did Henrik ever choose the perfect moment to deliver his 1000th point in style with a goal versus former teammate Roberto Luongo.

Down 1-0 in the second period, cue the Sedinery play taking over and pulling 18,000 fans to their feet. Edler to Daniel to Henrik putting the puck past Luongo. Pandemonium ensued as cheers rained down as the arena made their appreciation heard loud and proud. You could not have scripted the moment ANY better (unless perhaps somehow Burrows had been on the ice). Even more heartwarming than seeing that goal right in front of our seats was seeing not just the entire team rush to the ice to take in the moment, but also the props given to Henrik from Roberto Luongo.

In case you weren’t lucky enough to witness the moment live in all it’s glory, here it is:

Here’s a little snippet of what it felt like to be there (credit to fellow Canucks fan Clayton Imoo for capturing the following video):

Henrik wanted the point and to reach what once seemed like an impossible feat but more than that he wanted two points for his team. Isn’t that just like Henrik, that rather than be consumed by his own milestone, he put his team first? Sounds familiar doesn’t it? The Sedins while deserving of immense respect do not go out looking for recognition, they simply go out setting an example of what giving their best looks like every shift.

Once again Henrik reached this latest milestone with his brother not too far behind him in the hunt for the very same feat. Daniel Sedin with an assist is now just 32 points away from joining his brother in the 1000 points club. Will we see another Sedin milestone this season or maybe early next season? One thing is certain, whether it occurs this year or next season, Canucks fans are incredibly lucky to get to witness both milestones.

The day will come when the Sedins retire, but until that day comes, take in every moment of Sedinery that happens. Thank-you, Henrik and Daniel for 17 years and counting of incredible moments that will live long in the history of the Vancouver Canucks.

(side note: here’s a snippet of another incredible moment captured during Henrik’s milestone night, courtesy of the Vancouver Canucks:

To the guy who started it all, you’re a legend. To all #Canucks fans, you’re really good singers. #NationalComplimentDay pic.twitter.com/L5MeyVz4bO