This summer at Nucksaid, I decided to make it all about the fans, by putting the spotlight on all of YOU, and allowing you, the fans to tell YOUR stories! I have been asking to hear about your Canuck stories, and you have been more than kind sharing them with me! It seems only fair that I also include my own story in the mix, right? Right…so now you will hear my Canucks story!

[Don’t worry there are more True Blue stories on the way from others and there is also plenty of room for MORE of you to join in the fun as we count down the days to eventual puck drop of the regular season! If you’d like to take part, simply send me an e-mail to nucksaid@gmail.com with the subject line: TRUE BLUE & I will send you all the details you need! In True Blue:Part Six I introduced you to Brandi & David…click the link below to read their stories:

Are you ready for the tables to be turned on me? Here we go…!

I am Sarah Laug and THIS is my TRUE BLUE story, in MY own words:

I will be the first to admit that I never imagined that I could be taken by hockey, let alone any sport and now it seems impossible to ever not love the “best game you can name, the good old hockey game.”

My love for the Vancouver Canucks and hockey itself came over me very slowly and then suddenly all at once. It was not that I ever disliked the sport, it just never was something that truly caught my eye when I was younger aside from watching hockey in the Olympics and the odd game, here or there. I was too young to appreciate or fully understand the magic that was the 1994 Stanley Cup run. It was not until high school that I really started paying attention to this team called the Canucks and learning all the I could about the game. My neighbours LOVED the team and always invited us over to watch the games…and slowly I started to notice feeling a gravitational pull towards this game and this team. I cannot remember the exact game but it was one the featured a snazzy play by Nazzy and some early Sedinery with Anson Carter in the 2005-2006 season that sealed my fate and captured my heart as a True Blue Canucks fan and there was NO turning back. Did they make the playoffs that year? No, but it was the off-season that brought change and re-ignited the team with hope with the hiring of Alain Vigneault and acquiring of Roberto Luongo.

The 2006-2007 season that followed grew my love for the team and that goalie, Roberto Luongo who played a Vezina worthy year stole my heart completely for this game. A goalie sets the tone for the game, and LU came out with absolute determination that gave the team a chance to win every night. That was the season I decided to go all in with my non-wavering support for the this team. The team surprised a lot of people that season and gave us a thrilling ride all the way through two playoff rounds…including an epic game seven win sealed with a series winning goal from Trevor Linden. Every year since then my love for the game and the Canucks has grown exponentially. I may have turned into one of those fans who can quote stats forwards and backwards and possibly yells at the TV like the team and the refs can hear me for each good/bad call made or when that big goal is scored…but like I said, there is NO turning back. The Canucks are my team and I will always stand by them through thick and thin from game 1 all the way to game 82 and any games that go beyond.

Do I have an all-time favourite player? More like MANY favourites because it is way too difficult to just choose one. My favourite former Canucks include Markus Naslund, Trevor Linden, and Roberto Luongo, all of whom were the epitome of class acts both on and off the ice during their playing tenures with the Vancouver Canucks.

As for current Canucks my favourites would be Alex Burrows, Kevin Bieksa and Zack Kassian. I’ve been watching Burrows and Bieksa play together since their time with the Manitoba Moose to now and I absolutely love their tenacity on the ice. I love that Burrows came in undrafted and unwilling to give up on his dream and always capable of a BIG moment when least expected. Bieksa in his own words is a Canuck through and through…his loyalty to his teammates, his chirping and his insanely timed goals are beyond valuable. Kassian every year shows more and more determination and dedication to his game and is always willing to stand up for his teammates.

Do I have an all-time favourite Canucks moment? Much like having more than one favourite Canucks player…I have MANY favourite Canucks moments. Luongo’s TWO shutout streaks (November 2008, November 2009), being in the arena LIVE for games (nothing compares to seeing your favourite team get a WIN on home ice!, Burrow’s back to back hat tricks (2010), Burrows playing with the Sedins, Bieksa’s SAVE & GOAL vs. Colorado (2012), Daniel’s last second goal against Detroit (2012) OR  his between the legs goal vs. Calgary (2010), Hank’s 112 points (2009-2010), Lu’s 72 saves vs. Dallas (2007) or his SCF game 5 shutout (2011), Hank’s penalty shot goal (March 14, 2012) that had the arena on their feet, Hank’s 1000th game (2014) or THE goal off the Stanchion courtesy of JUICE (2011) that sent the Canucks to the Finals…BUT tops on this list IS Alex Burrows slaying the dragon in OT vs. Chicago (2011)…it felt as though you could hear the cheers from Canucks fans everyone when that puck crossed the line…THAT moment was absolute MAGIC. I look forward to adding many more favourites to this list as the years go by. One other moment that will always stand near that moment against the hawks, will be the moment that Roberto Luongo was Olympic GOLD on home ice at Rogers Arena…a moment that NO ONE, no matter how hard they try can ever take away from him.

My personal most recent favourite Canucks memory is when I won a twitter contest and got to be a part of the 2014 Canucks For Kids Fund panel….and YES if you look close you will see that plaque next to my name….YES I sat next to Captain Kirk during the telethon! It was an epic experience!!

I love every little thing about this crazy game called hockey….every up and every down, every goal, every save, every rush down the ice, every face off, every epic playoff run, every magic overtime moment, every game tying goal…everything. I love everything about hockey, EXCEPT for that dreaded little one-on-one contest they call a shootout that follows an unsolved overtime period during the regular season. I despise shootouts…they ruin the team component of the game and turn a wonderful up tempo end to end game into a one-on-one skills contest that sometimes costs the better team on the ice the game because as we all know…the shootout is not every team’s forte. The only other thing that irritates me to NO end in hockey is when journalists try to influence how fans think about their team and the game…it is okay for fans of all kinds to have differing opinions.

I’ve already told you my favourite aspect of hockey (Canucks and non-Canucks related) is the FANS. I love the connection that is formed within fans of a team, fans of rival teams, and fans of the sport in general. I love discussing and debating this wonderful game with fans of all levels from all over the globe…there is always room to learn and share more about this great sport and about my Canucks. There is something very special about fans coming together whether it is in the arena cheering together, watching the game in a restaurant(pub or at home) or during an epic playoff run.

When it comes to pre-game and game day rituals, I have a few. Nearly every game day will find me wearing one of my four jerseys(hoping to add another this season!) and during a playoff run as girly as it may sound..I paint my nails in Canucks themes. Every game day also usually involves making sure there are game approved snacks (chips+salsa,) on hand for when that big goal gets scored or even some victory/consolation ice cream. 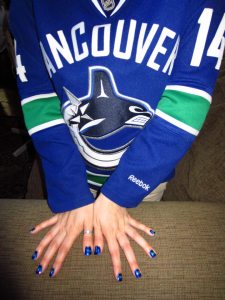 I am not lucky enough to have season tickets just yet but I would LOVE to be so lucky someday in the near future! I try to go to at least 3-5 games during the regular season….and if I’m lucky at least ONE playoff game when the team goes to the post-season. There is ONE game that I have gone to EVERY season starting in March 2008…the game that is ON or closest to my birthday that the Canucks play at home. It is one of my most favourite birthday traditions that I have with my family all Canucked out in our jerseys cheering for the team at the arena. Yes, it’s true, I’ve converted an entire house that once held no hockey fans, all into diehard Vancouver Canucks fans.

How do I feel about the upcoming 2014-2015 season? Last season after January, it was hard to watch the team at times as things began to fall apart and it became inevitable that changes were going to be made. It felt like a black cloud began following the team and storms followed as the season broke down. Bringing Trevor Linden back to the Vancouver Canucks was an absolute breath of fresh air after the last few years with Mike Gillis. Linden came in promising to make changes and promising that he would keep the fans in the know and he has done exactly that. With Linden came GM Jim Benning and newly minted NHL head coach, Willie Desjardins to help usher in this new era in Vancouver Canucks history. The newly formed brain trust has been hard at work taking care of business (the Kesler trade, developing the prospects, the Miller & Vrbata signings!) as they prepare for the upcoming 2014-2015 regular season.

There is a LOT of potential with team Lindenning and players coach Desjardins at the helm moving forward with the team. I am looking forward to whatever comes next and while the season may be far from perfection…it will be worth watching the entire journey from start to finish no matter the outcome. Mostly, I am excited to share this upcoming season with ALL of you, whether you are a Canucks fan, rival fan or simply just a hockey fan…as we are in for a wild ride league wide!

I am now, always have been and always will be a true blue bona-fide canucklehead and there will be NO changing of my ways. As always, until next time, nuck said.

One last photo, one of my favourites featuring my dear beloved canucklehead Bailey, who spent more than 13 years being the best companion. I will miss you always my dear, sweet little Bailey. (December 8, 2000 – July 27, 2014).