What am I asking YOU, the fans for? Simply to share your Canucks story and what makes YOU a Canucks fan through and through. If this sounds like something you would like to be a part of, simply send me an e-mail to nucksaid@gmail.com with the subject line: TRUE BLUE and I will send you the details. I will be featuring True Blue profiles all way up until to the first game of the 2014-2015 regular season, so there is plenty of room for as many fans as would like to participate!

In TRUE BLUE: Part ONE, you were introduced to Anthony and Gary (click to link below to check it out, if you missed it):

Are you ready to meet some more amazing Canucks fans?

Meet Canucks fan, Brieann Knorr…how many Canucks can you spy in the background? (Picture provided by Brieann). 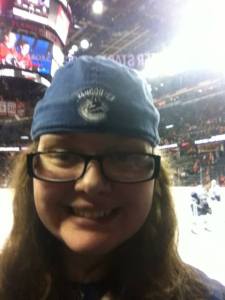 This is her TRUE BLUE story, in her own words:

“I became a Vancouver Canucks fan in 2003, after my Dad and I had been watching hockey for years. I got my first Canucks jersey for my eighth birthday and have been a fan ever since.

I have 2 all-time favorite Canucks. The first would have to be Markus Naslund as he was my favorite player growing up. I was still a little young when he was playing but I remember he was such an awesome player and a great person. I got the chance to meet him and it was incredible. I almost cried when he retired because he deserved everything, he is such a humble guy. My second favorite has to be Henrik Sedin!! He is the most humble player the Canucks have ever had. I like his humbleness and how dedicated he is to the team, players and the fans. He is one of my role models.

My favorite all time Canucks moment has to be the 2011 Cup Run. I had never been on a Cup run and it was the best and worst moments as a Canucks fan! I have never seen a city more united around a team. I have never been more passionate for the team and I can only imagine what winning the Cup will be like.

I love that hockey unites people! That we all cheer for the same team and can talk about it together BUT I don’t like the hate that players get from the fans.

I consider myself to be a semi superstitious fan…I tend to think I can control what happens on the ice even though I know its impossible. I don’t like watching games because I think I could make them lose.

I feel hopefully optimistic about the 2014-2015 season! I feel like the changes made were needed to make this team a championship team. I feel like the team that is being brought in will be exciting a new and something we have never seen before!! I am very excited about what the future holds. -Brieann”

Markus Naslund was the epitome of a class act both on and off the ice, and seeing his jersey go up to the rafters joining Smyl and Linden was amazing to witness. The 2011 playoff run was an absolutely unreal time to be a Vancouver Canucks fan! Everywhere you turned, there were people representing the Canucks, blue and green took over local businesses and you could sense something special was happening. I’m excited for the next great playoff run that will take the province and Canucks fans around the world by storm!

Next up, I’d like to introduce you to Tony Maguire displaying a beautifully made button picture that his daughter, Katie made for his birthday! (Picture provided by Tony). 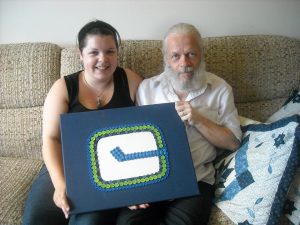 This is his TRUE BLUE, story in his own words:

“My Canuck story starts the same year as the Canucks. Being a fan of the Ballet on Ice I’m not sure what drew me to the Canucks. The early years were difficult but through all the abuse of other hockey folks and the roller coaster rides that were the first few seasons, I still remained loyal and true. I guess what really sealed the deal for life for me was 1982 and our first cup run. I had been to many games but never had the excitement of watching the Canucks go so far and then into the finals. I got given a ticket and was sitting 3 rows behind the Canuck bench. The sights the sounds the smells of being a part of it will always be with me. From that point on it became my way of life as my wife and kids will attest to!

I am one of those obsessed fans who has extensive Canuck wear and memorabilia that when we moved recently, packed 4 large plastic totes. All my kids became Canuck fans and now the grand kids as well. A good memory is going with 2 daughters to a Vancouver game in 2004 to see them play our rivals, the Calgary Flames. The day before we were in the Cactus Club getting food when Trevor Letowski, Matt Cooke and Bryan Allen came in. We got to hang out with them, got jerseys signed and had the best lunch ever. Outside the arena we waited for the Team bus from Calgary to arrive. When former (still my favorite) Canuck, Matin Gelinas got off we cheered and he came over and around the barrier to chat with us and we got a great picture.

The Canucks have been part of our family history during the 2011 playoffs, we got all six kids and the grand kids together for the games. My daughter Carolyn, even came down from Fort St John to be a part of it. I guess pizza and coca-cola are part of my game day ritual. I guess my least favorite part of hockey is the Media, self appointed experts, has beens and could-of-beens; telling me what I should think about the game and players. As for the upcoming season, who can’t be excited and know in their hearts that this is THE YEAR! The Management and coaching staff with the veterans and the new Canucks are going to bust it up! -Tony”

Going to a Stanley Cup Final game and sitting so close to the team bench would be an absolutely amazing experience! The sights and sounds of a playoff game are so much more intense than a regular season game, the cheers and silence from the stands echo the pattern of the game on the ice. If you have never been to a playoff game, I suggest the next playoff run, you try to go…because there is something so special about being there live for a playoff victory and cheering with 18,000 + fans together. .

Special thank-you to BOTH, Brieann and Tony for sharing their TRUE BLUE stories! I hope you enjoyed reading them and are looking forward to the fan stories still to come this summer!