This is a story about how we got stuck in limbo. Lockout Limbo. That is where the fans, players and NHL executives are trapped until this CBA business is all tied up. It was only a matter of time before the NHL announced to canceling of the remaining pre-season games of 2012. Who cares about the pre-season! Just please tell me that these next  three days of meetings between the NHL and the PA will finally amount to something in regards to the long awaited CBA. Could their agreement on secondary issues be a sign that negotiations are finally becoming that…negotiations?  After 5 hours of meetings yesterday…the two sides were scheduled to meet again this morning at 7:00AM [pacific time] and again at some point on Sunday. Only time will tell if this round of meetings hold any wait. I’d like to say that with both sides agreeing on some secondary issues that there is hope that there will be some progress moving forward[probably not as quick as all the fans would like…but progress of any kind right now is a step forward!]. Oh how nice it would be to hear that these weekend discussions have led to some serious progress!

In other news Mr.Katz [aka the owner of the Edmonton Oilers] issued a public apology to the city of Edmonton for not taking the fans and their passion into consideration when he toured Seattle as a possible relocation destination. Maybe good old GB[aka Gary Bettman] should consider issuing an apology to ALL the fans of the NHL for this THIRD lockout limbo he has forced upon us.

Oh Lockout Limbo…how I hope you end so very soon. I am tired of it already…and all we have missed so far is the pre-season. Yesterday was National Jersey Day in Canada…and well you all know how I’ve been itching to sport the blue & green again…so I couldn’t resist: 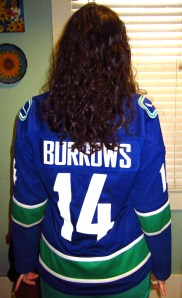 MY FINGERS ARE CROSSED that as the pre-season is officially off the table that SOON GB & Fehr will announce a new CBA and the re-instate the season!!

Its time for this ridiculous Lockout Limbo to end. None of us enjoy this state of uncertainty as the *pending season* hangs in the balance. This story of the fans, NHL executives and NHL players being stuck in Lockout Limbo is driving me crazy! I just want the season to freaking start already!! Who’s with me?! I know, I know…this lockout has many people down…BUT I’m choosing to remain optimistic. You can join me or decide not to, the choice is yours. There is always room for hope even when some say no. I say what is the harm in having a little faith? There is none as it is my choice. I choose to be optimistic because there is point in being negative about something that I have no control over. Just because we are stuck in this oh this so terrible Lockout Limbo…does not mean that my love of the game is stuck in limbo. My love of hockey will continue regardless of the length of this Lockout Limbo corner that Bettman has forced us all into until that new CBA is reached. I must say…this corner of Lockout Limbo is crowded….it is high time to officially reward the fans with the remainder of the 2012-2013 season.

Do you remember when fans all around the league razzed one another about their ridiculous loyalty to their teams? That is the usual practice. The ONE positive thing about this Lockout Limbo is that ALL fans from ALL different teams are uniting together [regardless of their regular season loyalty] to make their voices heard as one

Oh Lockout Limbo….how tired of you I grow every day! Oh Lockout Limbo…how I look forward to [SOON…I hope!] hearing that you are no more. As always, until next time, nuck said.